Praising in the fight

“When her owners realized that their hope of profit was gone, they seized Paul and Silas and dragged them into the marketplace to the authorities. Bringing them before the chief magistrates, they said, ‘These men are seriously disturbing our city. They are Jews and are promoting customs that are not legal for us as Romans to adopt or practice.’

The crowd joined in the attack against them, and the chief magistrates stripped off their clothes and ordered them to be beaten with rods. After they had severely flogged them, they threw them in jail, ordering the jailer to guard them carefully. Receiving such an order, he put them into the inner prison and secured their feet in the stocks.

About midnight Paul and Silas were praying and singing hymns to God, and the prisoners were listening to them. Suddenly there was such a violent earthquake that the foundations of the jail were shaken, and immediately all the doors were opened, and everyone’s chains came loose.”

This is certainly one of the stories that most impacted me. The way God took care of Paul and Silas, worked a miracle, converted the jailer, how they handled the situation, are questions that make me cry whenever I look back on this story.

I recently went through a bad situation. The fights came with everything to the point of messing with the physical and emotional well being of my family.

At one point, after a situation that shook us too much, my mother and I were sitting in the living room, talking. After our dialogue, I put on some music and went to get clothes for my brother who had come out of the shower. When I realized, it was me, my mother and my brother, speaking with all our might the verse mentioned in the song.

It was the moment when I was able to feel a little bit of what Paulo and Silas felt. It does not mean that the difficulty passed instantly, but that we would remain strong with our eyes fixed on the Cross of Christ, which brings us life and hope that it is not yet the end.

God is the One who saves us, sets us free and who, with His faithful right hand, sustains us daily.

Believe. Just believe. This struggle you are facing is not the end of you. Raise your hand and worship. Praise the One who has the power to save. The best place to worship is in the middle of the desert because we can see the miracle happening. 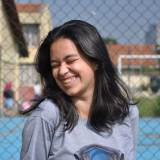